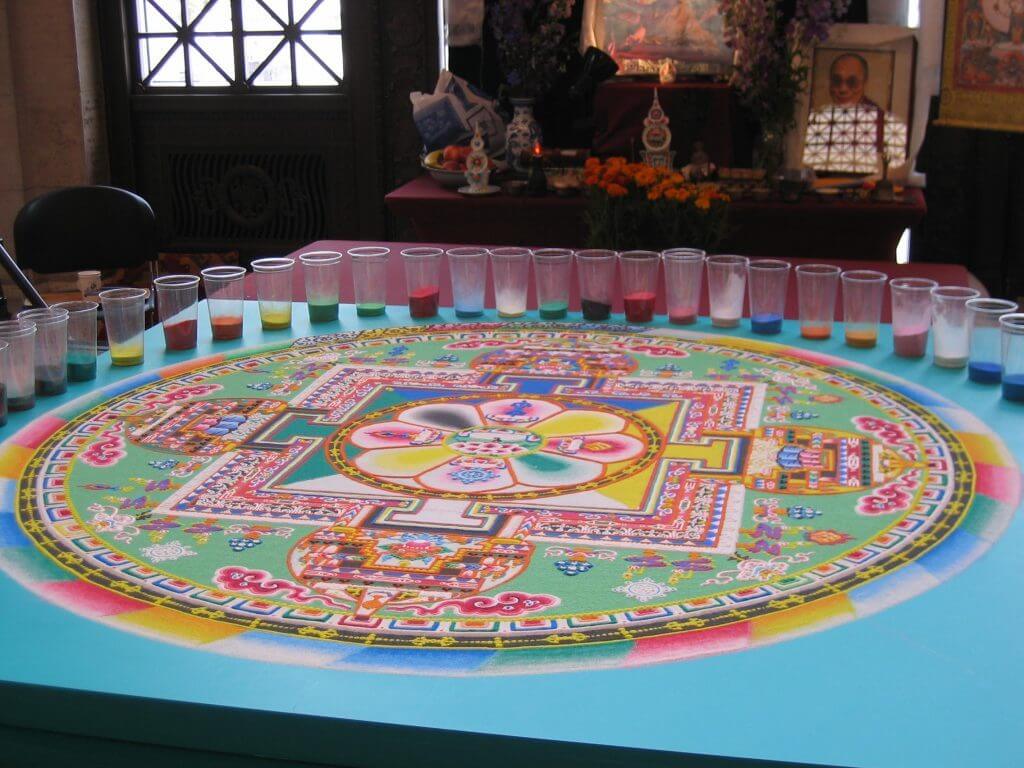 Designing and the Mandala

There is a ritual in the Tibetan Buddhist tradition that involves creating an intricate and elaborate design using nothing but colored sand. A group of monks, each with many years of training, work together in disciplined silence using basic tools such as funnels or spoons. Shifts can last as long as eight hours, and each project—called a mandala—could require several days of work. In time, a mandala goes from something simple to something profoundly complex, and also very fragile.

It would be natural to think that once “finished,” the monks would do something to ensure their delicate creation would endure. Perhaps spray the entire work down in adhesive, or frame it under glass so breath nor wind would disturb it. This is not what the monks do. Only hours after the last grain of sand is placed, the dismantling ritual begins.

Usually, the sand is collected into a large jar and released into a river. From start to finish, the goal of the monks is not to create a thing, but to take part in the act of creation for the sake of itself. Mandalas, then, are an exercise in change. They represent nature, and the full cycle of creation to destruction to recreation that defines the universe.

Maybe it’s the part of me that loves the idea of Zen that finds this ritual so beautiful. Far more likely, however, it is the designer in me that is drawn to an art form that can never really said to be “complete.”

...IT IS THE DESIGNER IN ME THAT IS DRAWN TO AN ART FORM THAT CAN NEVER REALLY SAID TO BE “COMPLETE.”

Whenever a coworker peeks his head into my office to ask if I’m finished with a design yet, I think about mandalas.

Whenever I turn in wireframes for a client presentation and the resulting conversation means I have to start over from scratch, I think about mandalas.

When requirements for a project change halfway through and I have to adapt my designs to keep up, I can’t help but feel like my computer mouse may as well be a funnel of vibrant sand.

To some outside of the profession, these scenarios likely sound frustrating. How annoying it must be to have to redo hours of work, or to switch direction midstream. But to me, design work is just like the mandala: it’s an exercise in change.

I believe it’s helpful to think about design, and I might be talking about the design of an app here, or a website, or even the code that makes those designs come to life, not as a task that needs checked off, but as a process. With each new iteration—each new pass of the sand funnel—something evolves and becomes better. We learn more about how users interact with the apps we build, and we update the design accordingly. We find bugs in the code, or imperfections in the design, and we pass over them once again with the sand, covering what was there with something new that may just as quickly be covered again.

BUT TO ME, DESIGN WORK IS JUST LIKE THE MANDALA: IT’S AN EXERCISE IN CHANGE.

There is beauty in change. There is beauty in iteration, and in the pursuit of constantly working towards something better. I may not be throwing any of my professional work into a river after I’ve finished, but, then again, maybe it’s best not to think of any design work as ever being truly complete.